Using this dataset, we can train and evaluate machine learning classifiers that consume a short window (30 seconds) of multivariate fNIRS recordings and predict the mental workload intensity of the user during that interval.

Of all available datasets suitable for building mental workload classifiers, this dataset is the largest known to us by a factor of 2.5! Plus, it supports fairness audits by age, gender, and race.

If you have any questions, please reach out to Leon (leonwang(at)cs.tufts.edu)

We are interested in building brain computer interfaces (BCIs) that would help out everyday computer users working at a desktop or laptop. In our target future use case, a user would actively use a keyboard and mouse as usual, but also wear a non-intrusive headband sensor that would passively provide real-time measurements of brain activity to the computer. Based on moment-to-moment estimates of mental workload, the computer could adjust the interface to support the user.

Functional near-infrared spectroscopy (fNIRS) is a promising sensor technology for achieving this goal of "everyday BCI". We have developed a prototype fNIRS probe mounted on a headband that we used to collect this dataset.

Our project's contributions are:

For each participant (68 recommended; 87 total), the dataset contains the following records obtained during one 30-60 minute experimental session. Each subject contributes just over 21 minutes of fNIRS data from the desired n-back experimental conditions, with remaining time related to rest or instruction periods.

To improve analysis speed and reproducibility, we also make available a preprocessed version of the data that was used in all our reported experiments. We applied bandpass filtering to remove artifacts, and extracted sliding windows of length 30 seconds and stride 0.6 seconds (3 timesteps).

Screenshot of the first few lines of the CSV from one subject's data:

Each row of the CSV file represents the fNIRS sensor measurements at one timestep.

There are 2 columns used as keys and labels:

All rows with the same chunk id represent the time series for a specific individual window. This window of measurements is the input to our classifier.

There are 8 measurement columns, which we use as features for machine learning classifiers:

Each column is a separate measurement of a hemoglobin concentration in the blood moving through the user's brain. Measuring the changes in these blood oxygen concentrations over time can be a useful proxy of mental workload intensity. The units of each measurement are μmol/L (micromoles per liter).

The paper describing our dataset and benchmarks can be found here:

We are pleased to report that the paper describing our dataset and benchmarks was recently accepted for publication at the new Track on Datasets and Benchmarks happening at NeurIPS 2021. NeurIPS is a top-tier conference for machine learning research.

Please cite our paper if you find this dataset useful:

Procedures to collect data were approved by Tufts institution's IRB (opens new window), and our deidentified dataset was approved for public release (STUDY00000959). Each participant gave informed written consent, and was compensated $20 US.

Because collection occurred during the COVID-19 pandemic in early 2021, we also got approval from the Tufts Integrative Safety Committee (ISC). We followed required sanitation and social distancing practices: experimenters used personal protective equipment and disinfected the fNIRS probe for each subject.

Details of task sessions is as below:

Before experiment started, the system played a short introductory video, showing an example of a user completing n-back tasks, with voice-over and caption explanations.

Sample scripts for N-back task video are as below:

Today you will be completing a series of n-back tasks. You will be presented with many numbers, one after another. Some of these numbers will be targets. A number is a target if it is identical to the one shown n steps previously.

Let’s view an example of a 0-back task.

At the beginning of each task, you will hear a few beeps which indicate the start of the task.

The current type of n-back task can be found at the top of the task window. In this example, n = 0. For the purposes of this demo only, the stack of numbers already shown is included beneath the task window.

Now let’s view an example of a 1-back task.

For example, this 4 is a target number because the previous number was also 4. The participant should press the left arrow key, and then continue pressing the right arrow key until they see the next target number.

Here is another target number. The number 1-step back was also 2, so the participant should press the left arrow key.

During today’s experiment, the stack of already shown numbers will not be visible to you. It is your job to remember the numbers that were n-steps back so that you are able to identify the correct target numbers.

After each task, you will complete a survey. Once you have completed the survey, you will be able to rest for 20 seconds.

The experiment will take approximately 40 minutes.

After the entire experiment is finished, you will complete a short interview about your experience.

Please remain seated and do not talk or adjust the headband while completing the experiment. However, if you do feel uncomfortable at any point, let the operator know and they will stop the experiment.

Generel introduction: Before each task, the system displayed a graphic depicting how to identify targets for the current n, with voice-over.

The graphic and sample scripts for 0-back are as below: 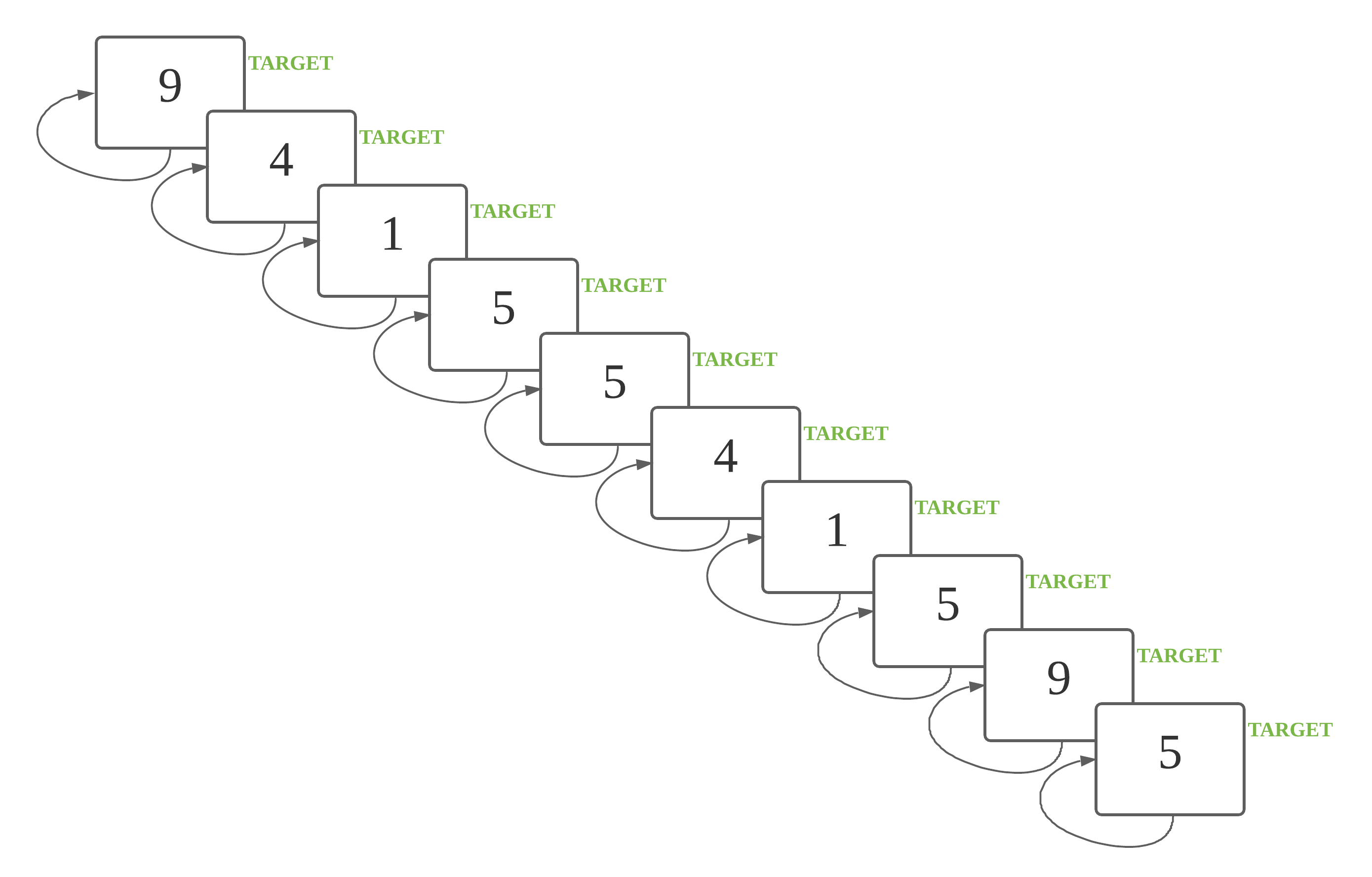 This is a 0 back task. Every number is a target number.

The graphic and sample scripts for 1-back are as below: 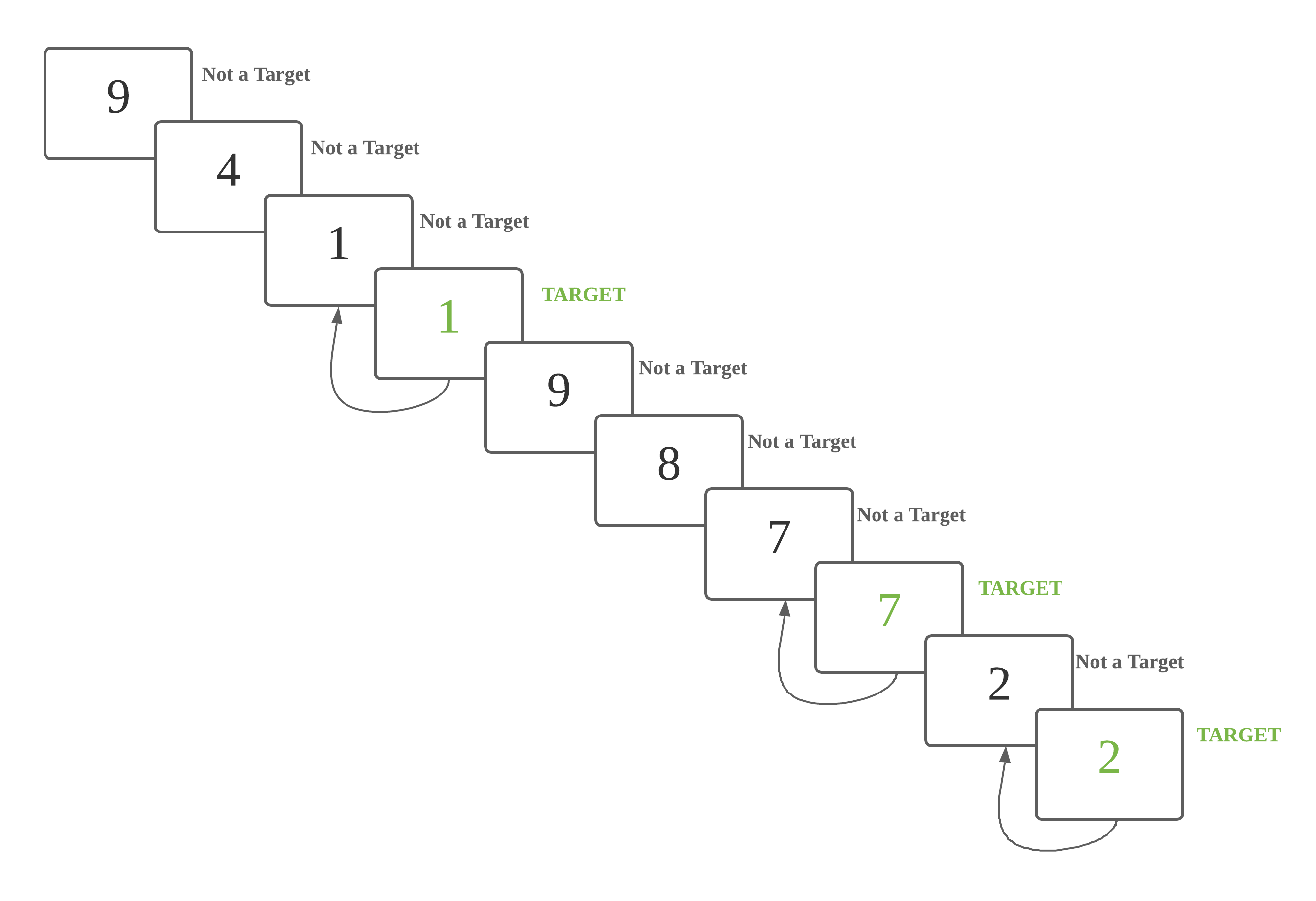 This is a 1 back task. A number is a target if it is identical to the previous number.

The graphic and sample scripts for 2-back are as below: 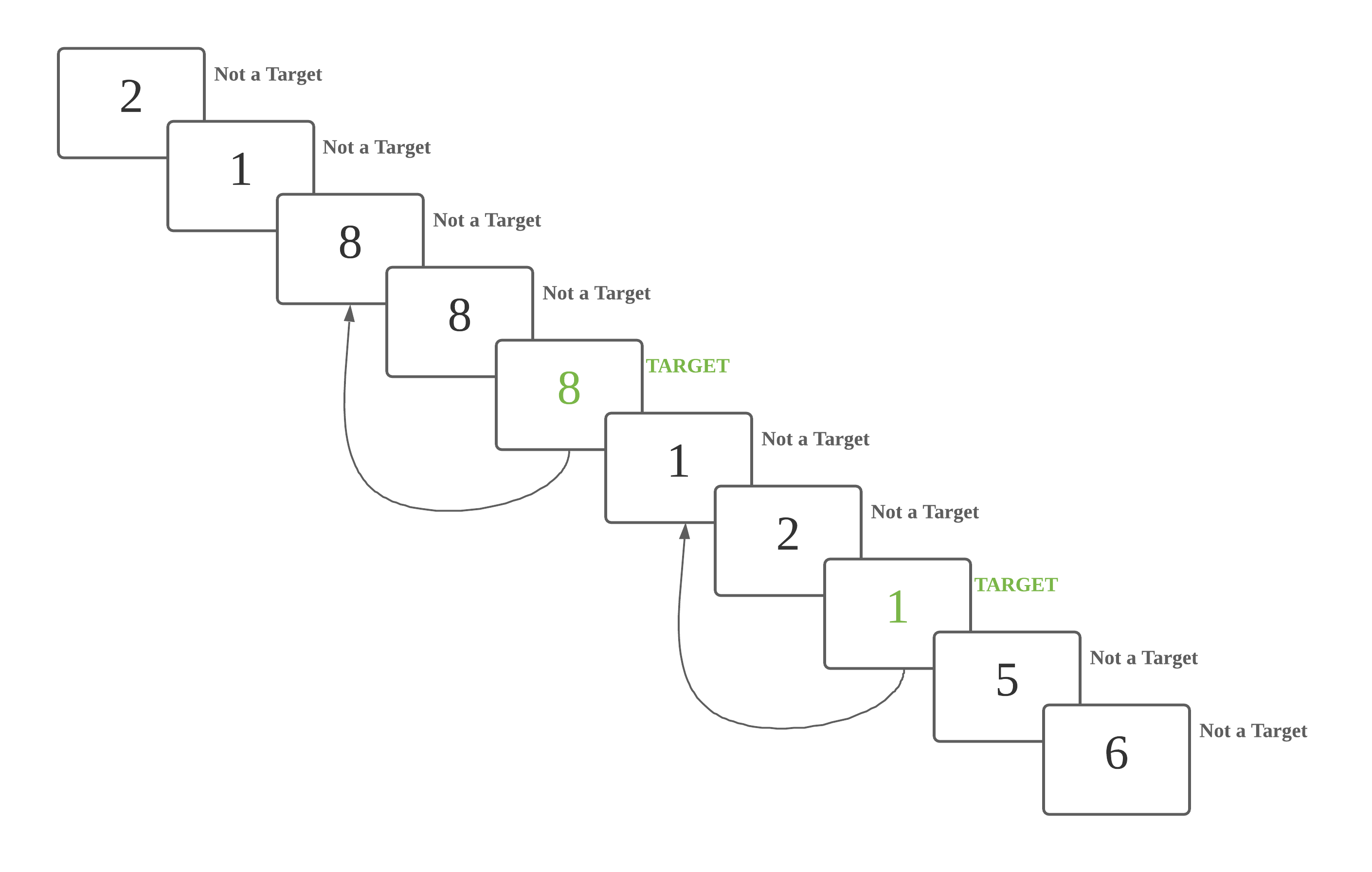 This is a 2 back task. A number is a target if it is identical to the number 2 steps back.

The graphic and sample scripts for 3-back are as below:

This is a 3 back task. A number is a target if it is identical to the number 3 steps back.

We introduce and describe the data format of fNIRS data (raw and pre-processed) and supplementary data as below:

68 participants were recruited, aged 18 to 44 years. None of the participants reported neurological, psychiatric, or other brain-related diseases that might affect the result.

After pre-processing (Dual-slope and band pass filter), we have features/columns as below: 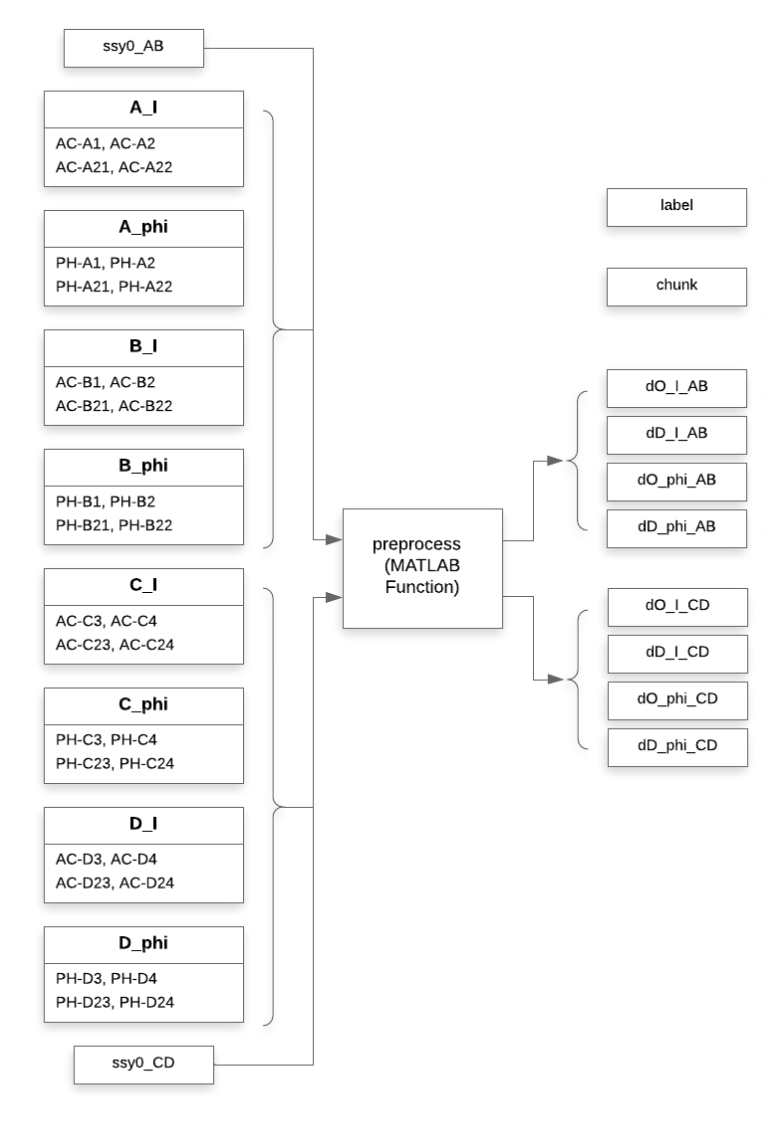 Screenshot of deidentified data sample is as below:

We offer pre processed data in :

Screenshot of deidentified data sample is as below:

To ensure quality and consistency, we used several criteria to identify which subjects' data are suitable for classifier evaluation.

Demographic and contextual information is recorded before the experiment.

the accuracy of each n-back task was recorded.

Please see details in the screenshot of fake data sample as below: 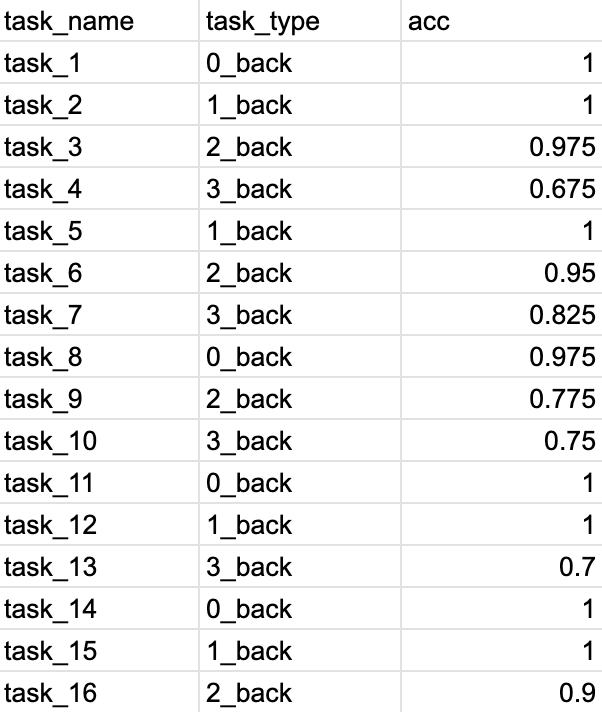 This is a good way to evaluate the perceived/subjective mental workload.

Please see details in the screenshot of deidentified data sample as below:

Hair blocking, light leaking, fNIRS instrument settings and other issues during the experiment were recorded.

Post-experiment interviews were converted from audio to text (pdf version) by the operator.

The original audios were destroyed immediately following the IRB protocol.

Taming fNIRS-based BCI Input for Better Calibration and Broader Use