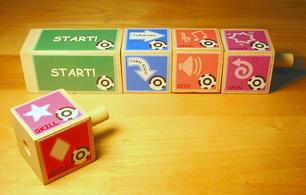 Tern is a tangible computer language designed to provide a painless introduction to computer programming for children in educational settings. With Tern you can create programs for robots like the LEGO Mindstorms RCX or the iRobot Create. Tern is featured in a permanent exhibit at the Boston Museum of Science (opens new window) called Robot Park (opens new window). It is also being used for the Tangible Kindergarten (opens new window) project at the Tufts University Developmental Technologies (opens new window) group. 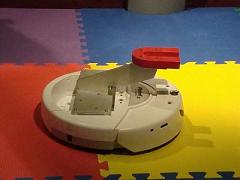 To create programs with Tern, you don't use a mouse or keyboard. Instead, Tern allows you to create physical computer programs using interlocking wooden blocks that represent actions for your robot to perform. With Tern there is no such thing as a syntax error. The shape of the interlocking blocks creates physical syntax that prevents the creation of invalid programs. Tern programs can be compiled in a matter of seconds with the press of a button.

Tern's wooden blocks contain no embedded electronics or power supplies. Instead Tern uses a standard webcam connected to a desktop or laptop computer to take a picture of your program, which it then converts into digital code using the TopCodes computer vision library (opens new window).

This video shows Tern in use at the Boston Museum of Science.

We will post open source software and fabrication templates here soon. In the meantime, please email michael.horn [at] tufts.edu for information. 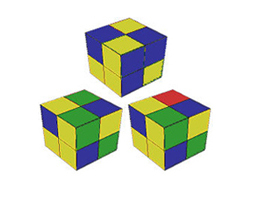